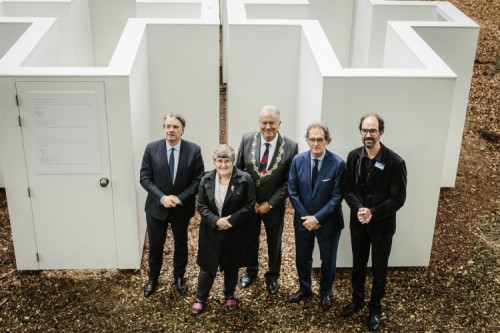 Thursday 13 June was the opening of the Dilemma Doolhof which roughly translates to ‘Dilemma Maze’. The Maze is art producer Mothership’s most recent interactive art installation. The extraordinary installation is located between the Canadian and British war cemeteries in Bergen op Zoom. The installation confronts visitors with major decisions in conflicts from past and present. The impact of the Second World War is made tangible and palpable during a walk in the maze. Through this experience the impact of World War II is conveyed to younger generations. The Dilemma Maze was conceptualized by Mothership and developed by Brabant Remembers in collaboration with the municipality Bergen of Zoom and Heijmans. Those present at the opening included Frank Petter – mayor of Bergen op Zoom, chairman of Stichting Crossroads Brabant ’40-’45 Ton Rombouts, provincial governor of Noord-Brabant Wim van de Donk and Canadian ambassador Sabine Nölke. The Maze will remain in Bergen op Zoom for a year.